It’s interesting that such a hot city as Seville celebrates the coldest festivity of the year in the best way. We’re referring to temperatures and not temperament, since they both provide plenty of warmth. An perhaps this is why, because Seville is like the warm embrace of a mother when you arrive at the station on the 24th December, that they make a great combination. 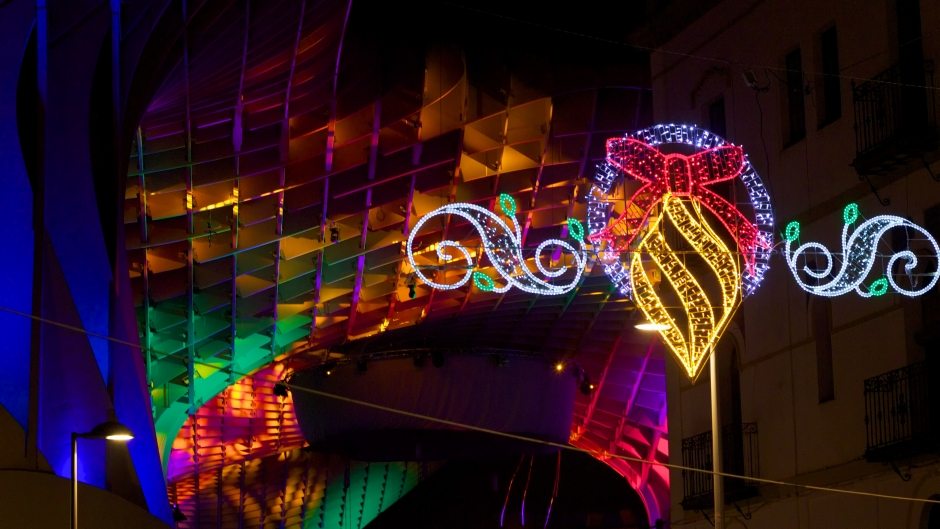 Wandering down Constitution Avenue, be dazzled by the infinite bright lights and then head towards what is locally known as ‘Las Setas’ or the mushrooms. As the evening falls, between 19th December and January 5th, the iconic viewpoint will host a unique 4D light show. As if this weren’t enough, during the same period, impressive 3D images and optical illusions will be projected on the main façade of the San Telmo Palace.

If you’re looking for something fun to do with the kids, perhaps you would prefer to take them ice skating in the San Francisco Plaza, turned into an ice rink. You will be able to see snow on the pine trees and you’ll believe for a moment that you’re in New York instead of a city that reaches heights of 45ºC in August.

But among the novelty there is also room for traditions, and the Nativity Fair will once more be held by the Archive of the Indies. If you haven’t finished setting your nativity scene, here you will find the tiny details you hadn’t even thought about (and at the same time wrap yourself in the season’s spirit).

All this and more is part of the ‘Alumbra’ program, Seville’s name for the telling of the Christmas tale in the city this year. A story full of magic and dreams fills the season with festive light.
If you’re thinking of staying in Seville during the Christmas holidays we suggest you stay at Ribera de Triana Hotel, the best hotel in Seville by the Guadalquivir River.